Integration and career development of IST faculty and researchers

The program officially starts with a meeting convened by the President of the Department, with the presence of the mentor of the Assistant Professor/Researcher, where the relevant information for the tenure-track period is presented. This information is available on the Scientific Council’s website and the Shaping the Future Program website. Other documents deemed relevant to the Assistant Professor/Assistant Researcher are also presented.

The Shaping the Future Program takes place during the five (three for researchers) years of the tenure track period of the new IST faculty/researcher with the main action lines: 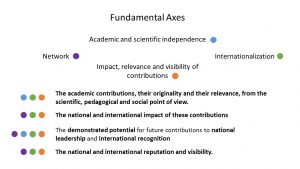 These activities include an initial Fundamental Training in the first year of contract, with compulsory participation, the Mentoring Program that assigns a mentor chosen from a pool of faculty/researchers that can be considered as good role-models, Lectures Observation with feedback, which may lead to complementary training activities suggested by the NDA team.

The Shaping the Future Program also provides support for the realization of partial sabbatical leaves in foreign institutions of reference and the allocation of start-up funds that aim at financing the sabbatical leaves and the implementation of specific scientific-pedagogical projects, guaranteeing the minimum conditions of support for the work of the Assistant Professor/Researcher.

The following diagram displays how actions are organized over time. 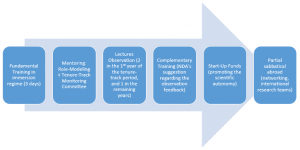